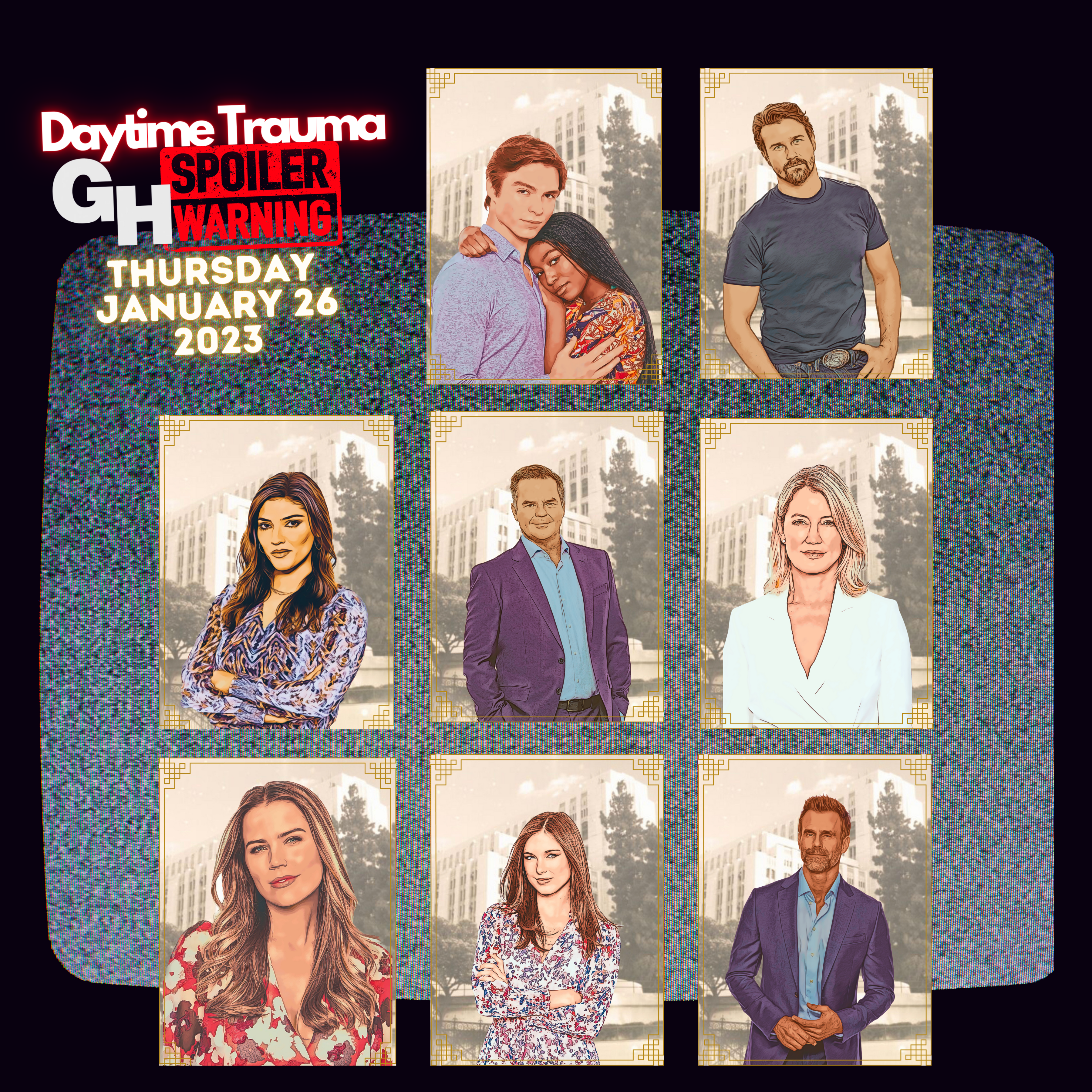 If you enjoy my take on General Hospital Spoilers, there’s a new Spoilers post Monday to Friday. Some previews may run later thab others but they will always post before the next episode of GH airs each weekday afternoon on Abc.

Before we jump into the plot spoilers, let’s take look at which characters viewers can expect to see during Thursday’s episode of General Hospital.

Just remember that only characters explicitly mentioned in ABC’s official summary of GH are listed.

Chances are more citizens of Port Charles pop up, but that’s the exciting part of soap operas: the excitement of not knowing what’s next.

For the episode of General Hospital airing on Thursday, January 26, 2023 viewers can expect to see the following characters:

Here’s what viewers can expect to see on GH on Thursday January 26, according to the official episode descriptions released by ABC.

A connection to what exactly?

The only connection Cody Bell needs to make is the one he’ll have to catch between flights when he’s finally, run out of Port Charles. Which begs the question: why is Cody still here?

Cody descended into PC to scam Britt out of a hideous necklace and faked a paternity test to legally inherit it.

By the way, I’m glad Cody passed up the chance to be Mac and Felicia’s adult son- he’s not worthy.

Cody was such a fucking tool to Britt, who embraced a quick onset of Huntington’s Disease to avoid dating him. Thankfully she was hooked by Heather Webber- which in my opinion, was an act of mercy.

Cody’s only tied to the canvas by one dangling plot thread: a dark childhood secret he shares with Dante. For the love of God do we need to subject Sam to more of Stable Baby?

If that wasn’t bad enough, the writers are teasing a possible romance between Cody and poor Sasha of all people- like she hasn’t been traumatized enough.

As for Cody’s longterm future his best case scenario is shacking up with Glady- and gambling all of Sasha’s money away. Then Cody can do that decent thing and die of a brain tumor like his mom Dominique did all those years ago.

But why should Drew’s feelings matter?

I’d like to make my feelings clear, why should I care about Drew’s feelings? Especiallly when none of this affects Drew.

Drew doesn’t need bone marrow, Willow does. Drew didn’t find out that Willow is his daughter- Nina did. Willow has stage four cancer AND a stage five clinger for a mother- those are real problems.

Can somebody clarify for Drew that Carly lies all the fucking time especially when it comes to keeping kids from their biological parents?

I know Victor brainwashed Drew but did he use that novelty size tarot card to make him a complete dipshit?

Thursday’s spoilers are not exactly a bunch of winners this week. Like who’s getting excited fot Brook Lynn and Ned visit Willow in the hospital? That’s off-screen shit right there.

Unless Ned and Brook Lynn are there to assist Willow in taking her own life- by singing to her. Leukemia sounds less painful but that’s just me. 🤷‍♂️

Anybody in Port Charles have Felty’s number?

Normally a scene like this would only be sort of shitty- but the way the rest of this episode sounds, it could be unwatchable. What truly irks me about this spoiler is that just yesterday “Carly confided in Joss.”

For real ABC? The bare minimum energy and effort is needed for these “spoilers”-its just a vaguely worded inference to plot points and characters meant to hooka potential viewer in. And somehow the week leading up to February sweeps, the best they were able to come up with was “_____ confides in _____”- on two consecutive days . Sigh.

Nina will probably weep to Sasha over not being a bone marrow match for Willow and Carly hiding it from her. Sasha’s going to think of the tragedy of losing both Baby Liam and Brando- and possibly run screaming into the night looking for pills.

Well, at least a relapse into drugs will give Sasha a way out of a romance with Cody. I bet Britt is looking up and smiling from Hell right now.

Can you blame her?

Trina can pretend she can handle pretending to be Spencer’s girlfriemd all she wants- but the truth is written all over her face. Spencer can barely hide that he notices- and in reality the game of pretend has placed him exactly where he wants to be- close to Trina.

These two talented actors convey all that complex emotional subtext without uttering a single word of dialogue. Tabyana Ali and Nicholas Chavez have always had chemistry but finally have the chance to lean into the attraction between Spencer and Trina.

As for Trina questioning Spencer’s motives- this could be a cautious Trina taking her mother’s words about the threat posed by the Cassidine family to heart. Could Sprina be worried that Spencer has ulterior motives?

The conversation could open to the door to Trina assisting in Spencer’s crusade to keep his unborn sibling away from Esme and his father. One request: can these two fuck already? ❤️

If you enjoyed this post about Thursday’s General Hospital Spoilers. check out my posts the from the rest of the week: Here’s Monday (1/23), Tuesday (1/24,) and Wednesday (1/25).