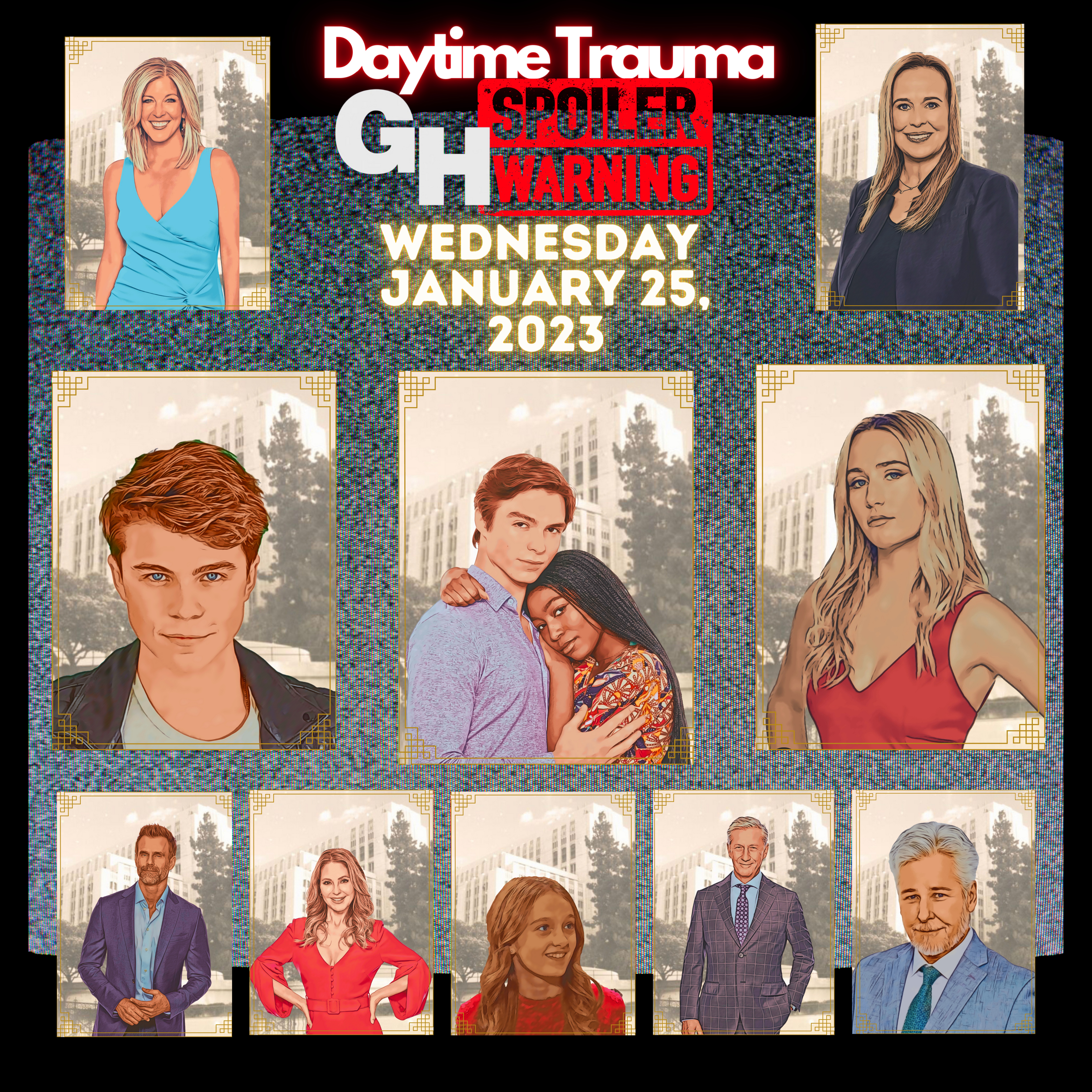 Here’s a sneak peek Wednesday’s episode of General Hospital (Weekdays on ABC, Weeknights on Hulu) complete with spoilers directly from the source- the ABC network’s episode listings. Find out what to expect on GH each day with a General Hospital Spoilers post for the following episode.

Before I get into the spoilers, here are the characters explicitly mentioned in the spoilers for the episode of General Hospital airing on Wednesday, January 25, 2023.

While there may be other residents of Port Charles appearing in this episode, these are the only character I can confirm from the episode summaries provided by the network.

I hope you enjoy my General Hospital inspired-artwork as much as I enjoy making it. For those who do enjoy the graphics, click on the video I made below.

Here’s what to expect according to ABC’s official preview for the episode airing on Wednesday January 25th, 2023 viewers

Spencer and Trina have questions for Cam.

Josslyn: Mom, I wasn’t 💯 truthful when I broke up with Cameron. Then he found me with Dex. I don’t feel bad- but I also feel terrible.

Carly: Sweetheart, you’re young. Things are complicated. You’ll learn from your mistakes. You will because I was there.

You know, when I hid the truth about Michael from his father I didn’t feel bad either. Or when I lied about who I was and slept with your grandma Bobbie’s husband. Or cheated on your father with Sonny. Or tried to pretend that your dad was actually Spencer’s biological father.

But I’ve learned my lessons over the years.

Josslyn: That put things into perspective. Thanks, Mom.

Carly: Oh, by the way, I hid the truth about one of Nina’s kids being alive again. It’s Willow. She’s gonna die. Love you, bye.

Laura’s not just the mayor. She’s also a beleaguered matriarch.

I love Genie Francis. And I love Laura Collins. The best thing this show ever did was make her the mayor of Port Charles and making it cannon that she can just bounce six months of the year with no political repercussions.

On Monday Laura had to pretend Nikolas was probably fit to parent (he’s not). Then Laura had to have lunch with Liz where you know she just wanted to say: “Your parents have been trash for 30 years. And your father is handsy- and everybody knows it. Be glad you are far away.”

Today, Laura will warn her brother Martin- about what? Probably that he shouldn’t trust anybody involved in defending Esme. Not amnesiac Esme. Not her dumbass son, Nikolas. And certainly not Victor Cassidine who will be nosing around Esme’s hellspawn the moment its born.

Martin Grey, being the deep-fried, Foghorn Leghorn-sounding, Southern dipshit that he is, will likely fail to heed Laura’s advice. Thankfully, Laura can look forward to a vacation away from these idiots at some point.

Spencer and Trina have questions for Cam.

Will Cam tell them the whole truth to his friends about Joss/Dex? Or will Cam just let it eat away at him slowly until he dies of a broken heart during a shift at Kelly’s?

Now this is going to be compelling as fuck. Spencer already reacted to the breakup and has called Joss out. Our dark prince also correctly deduced that Joss was banging Dex.

We finally get to see Trina’s reaction- and it will be interesting to see how the writers play this. Trina hasn’t been involved with the whole “Jex” saga- Joss has been lying to her, too.

I doubt Cam tells Spencer or Trina that he walked in on Joss with Dex- or that they had a huge blowout afterwards. But Trina is intuitive- chances are she picks up on Cam hiding something. Whatever info Trina does learn is going to have an impact on her relationship with Joss.

Trina is mature enough to be neutral on this- except for the fact that Joss has been secretive mto the point of being downright dishonest. It’s one thing to lie to a boyfriend, who’s a mutual friend. It’s an entirely different thing to lie to your best friend.

I have a feeling things are going to get a lot worse for Joss after today. Will we end up seeing this friend group dissolve? Personally, I hope Trina does stick with Joss- mostly because this show needs more

On the bright side, we get to see #Sprina together for the first time in a couple weeks.

Not as cool as it sounds.

All I could imagine when I read this was little Charlotte rolling up on her grandpa Victor, pulling out a Glock and blasting him straight gangster-style- which is would be like watching ‘The Nanny’ on acid.

I know it won’t happen but just in case it does I’m preparing to scream “Mr Sheffield, NOOOOOO!” at the top of my lungs.

In reality, Charlotte’s going to make Victor (maybe) feel bad for basically kidnapping her for a year. Still, part of me wishes Charlotte would at least put a snake in his hotel room or something.

Do you like the Hallmark Channel, Italian stereotypes and/or fast-forwarding? This scene was written for you.

There is no real suspense here. This is how it’s going to go down between these two characters.

Olivia: (wailing so loud that they can hear her from Bensonhurst) Why didn’t Willow and Michael tell me? I could have made pasta and stressed everybody the fuck out. Maybe said something implying Old World remedies are more effective than chemotherapy. Did you know? Oh my God. You knew?

Drew: I did know. I’m so sorry, Olivia. I’m taking accountability because I interact with everybody like I’m a fucking life coach. On that note, I am really upset with Carly because she knew Nina was Willow’s mom. Also, Nina is Willow’s mom. In case, you didn’t know.

Olivia: I don’t have time for this- neither do you. Go make things right with Carly, I gotta make Willow a manicotti that will cure her cancer right up.

If you enjoyed this first look at this sneak peek filled with General Hospital spoilers, check out my post for Monday January 23 and Tuesday January 24.