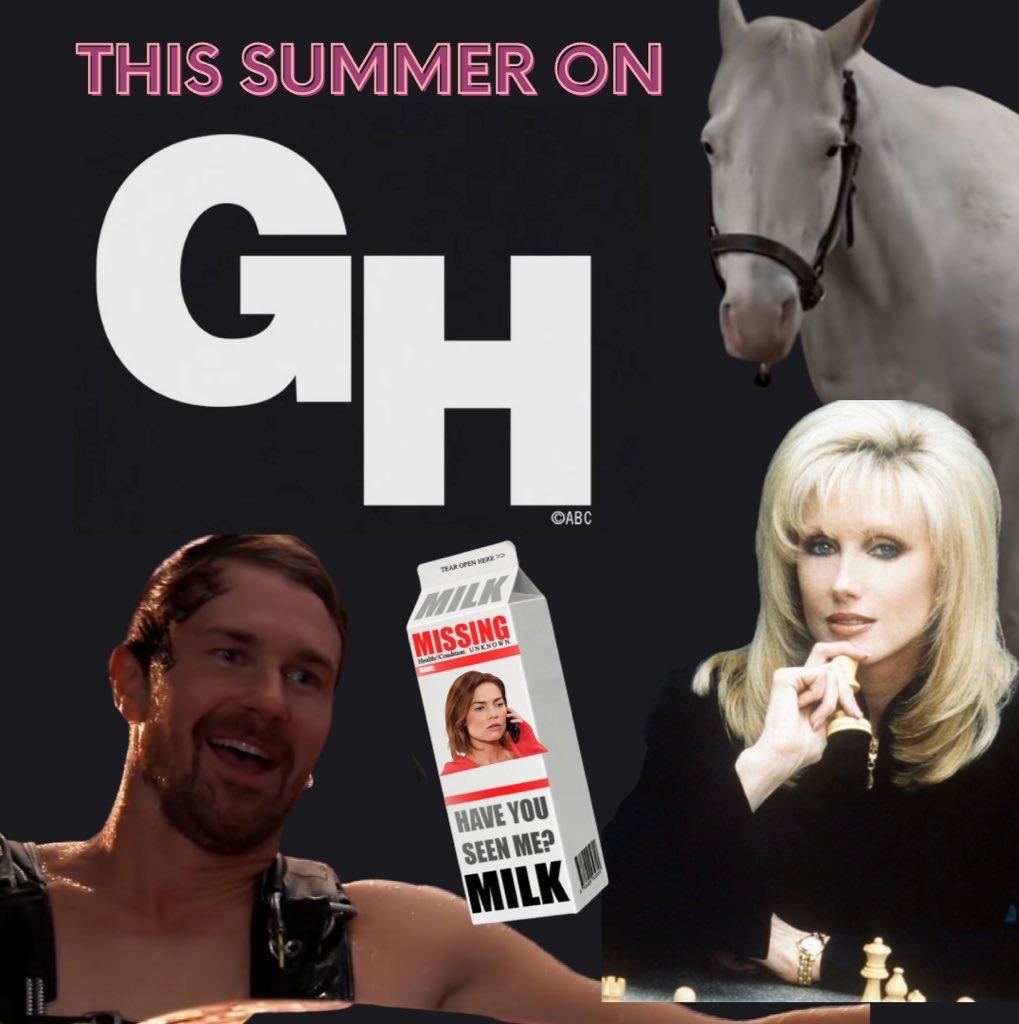 In Wednesday’s episode of ABC‘s ‘General Hospital‘, Michael and Willow add horses to their list of approved non-Wiley-related conversation topics. Cody goes from Dante’s couch to Quartermaine’s stable (it’s still an upgrade, that horse’s house is sick), and Britt suffers more indignity. And that’s just the first part of this episode recap.

At the Quartermaine stable, also known as Comet Quartermaine’s bachelor pad, Michael and Willow (Chad Duell and Katelyn MacMullen) discuss horses, the new baby, and (what else?) Wiley. You would think a conversation about horses AND babies is better than just hearing about Wiley, right? Wrong, it’s worse. ‘General Hospital‘ is laying the horse stuff on thick- and I know that sounds gross, but it isn’t. That would be too edgy for a show whose audience consists of horse-lovers and baby enthusiasts.

For a bit, the episode had me thinking that Willow would fall off a horse and lose this baby. Or maybe she will fall off the horse, die, and the baby survives. Or they both die falling off the horse. Something had to explain how Willow looked longingly at Comet in those stable scenes. Willow even regales Michael with a tale of meeting a horse at one of the communes Harmony raised her in. At this point, I wouldn’t be shocked if she ran away with Comet and they left the new baby at a firehouse, just like Pete August did to Bailey.

Comet Quartermaine gets a housemate

I was wrong about Willow’s equine-centric future since she mentioned that horseback riding probably wouldn’t be good for the baby. At least her degree from nursing school is going somewhere. All the horse talk in those scenes sets up for Cody Bell (Josh kelly) to become the new stable bro. I call him a stable bro since he’s too old to be a stableboy, but he hasn’t shown me anything to support evidence that he is a full-grown adult. Cody gets to live at the Quartermaine property full-time, a pretty sweet way to escape couch surfing for the rest of your life. I mean, look at how well Comet is living.

Once Willow and Michael head to the main house for more horse talk, Cody shares a special moment with his new comrade. Cody confesses (to a horse, mind you) that he is a hustler seeking a place to rest his weary head, where nobody can take what he loves away from him. That is, of course, if he could ever love again. And, no, I did not make that up. Cody had a monologue complete with what sounded like the lyrics of a country song. This dude actually said this to a horse. And this horse is technically his new roommate, landlord, AND his boss. I don’t like you, Cody, but please have some dignity.

At that very moment, Dr. Britt Westbourne (Kelly Thiebaud, who just won for Best Supporting Actress at the Daytime Emmys), who’s used to being robbed of her dignity at this point, shows up at just in time to interrupt Cody’s horse whispering. You probaby are wondering what could possibly bring Britt to the Quatermaine mansion, let alone the part of the property where they keep horses (and apparently homeless people). It’s a valid question since Britt doesn’t really interact with the Quartermaine family (outside of Monica, who is MIA at the moment). On top of that, she blames Cody for causing her eternal embarrassment with “Pool-Gate”.

Normally, I’d expect this show to ignore silly things like motivation and details, but they do explain why Britt shows up. Earlier in the the episode, we get a filler scene between Britt and Kevin where they rehash the whole “GIF of Britt falling in a pool” scandal. An orderly interrupts to inform Britt that a patient left their belongings at the hospital because reporting recovered property to the hospital’s chief-of-staff ASAP is the protocol for lost and found items.

Britt listens to Cody’s load of horseshit but remains unimpressed.

Cody shares that his deep bond with horses stems fom how much easier they are to understand than people. Britt’s completely unimpressed and equally put off when he brags about freeloading off the Quartermaines. Some advice for Cody: try not to act like a total garbage person, you’re giving homeless people a bad name. Not surprisingly, Britt rebuffs Cody’s offer to take her horseback riding. And even less surprising, Cody responds with a standing offer for lessons if Britt ever decides to push her limits. Britt asks him not to use her as his emergency contact again. Lucky for Cody, he has his roommate Comet Quartermaine to rely on.

That was the first of my two part recap of Wednesday’s epic General Hospital. I hope you enjoyed ‘From Homeless To Horsemate’. Leave me a comment below and let me know what your thoughts are on Cody, Britt, Michael, Willow and Comet Quartermaine. Or better yet, reach out on social media.

Check out the second part of this recap ‘Home & Heart & Hallucinations’, which should be posted soon. Thanks for checking out My Daytime Trauma.

Remember, you can check on General Hospital every weekday on ABC and every weeknight on Hulu. Catch up with the show on ABC.com.