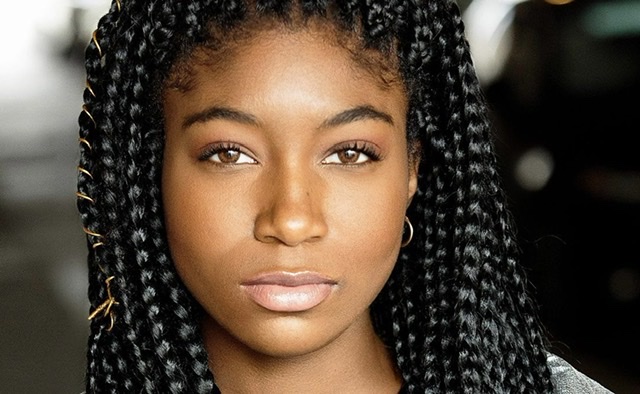 Sydney Mikayla signed off last month after three years on GH -and she will be missed. Thankfully, ABC chose to carry on her legacy with Tabyana Ali taking on the role of Trina Robinson.

Last month, viewers saw Sydney Mikayla’s final scene as Trina Robinson on General Hospital and of course, our girl did not disappoint. On March 24, her successor Tabyana Ali debuted on the show and shared her first scenes with William Lipton and Eden McCoy as the three friends addressed the fallout from the couple’s sex tape. The trio handling a crisis together was reminiscent of when Sydney took on the role back in 2019, as Trina, Cameron, and Joss were dealing with the inevitability of Oscar’s death. The bond between the friends has always been central to their respective storylines, making this a perfect choice for Tabyana’s first scene.

While Cameron is far from a bystander in this story, the friendship between Trina and Joss quickly took center stage in the episode. The fact that this was a great scene choice by the writers and a necessary one from the perspective of the audience did not make it any less of a challenge for both actresses. Sydney and Eden together worked for three years building the relationship between Trina and Joss, becoming incredibly close friends on-set and off the show, growing as both individuals and actors in the process.

Despite being new scene partners, Eden and Tabyana played old friends quite well

Tabyana hit all of those marks with Eden while showing viewers Trina Robinson as we have come to know her: sensitive, supportive, cautious, and genuine. As a viewer, I didn’t feel like these were two strangers interacting for the first time. In fact, if there was any awkwardness in their first scenes, this actually worked out in Eden and Tabyana’s favor on-screen, mirroring what the characters were feeling during the fallout from the sex tape. Props to the writers for choosing this scene for Tabyana’s first scene because it utilized the storyline to her advantage. Viewers got to see and feel this for exactly what it was: two friends feeling each other after the drama had put up some distance. I wasn’t as distracted by the fact that this was a “new” Trina because everything felt natural.

What followed was another opportunity for Tabyana to settle in the role- and offered another cast member the same opportunity. Her scene partner was Tanisha Harper, who recently settled into the role of Jordan Ashford. The characters have had a checkered past over Jordan’s handling of Taggert’s “death” and her part in faking his “death. Trina and Jordan had warmed to one another in the few months before the previous actress Briana Henry exited the role last fall.

Tabyana played Trina’s outrage exactly how she should have – never disrespectful because she respects her elders, but shocked that Jordan wasn’t seeing her for who she was. That outrage melted into fear as she found herself falling deeper into the gravity of the situation. Consider these moments a huge success for both actresses as they settle into their roles.

Tanisha Harper continues to put in a fine performance as Jordan

Tanisha Harper has done a fine job slipping into the role of Jordan- there’s a kind of discomfort coming off her and that’s a good thing. Jordan is back in a city that has moved on without her- and Tanisha is playing that in her performance. You can see Jordan feeling a bit on the defensive- wanting to reclaim her role and finding the circumstances making her difficult job that much more of a challenge. But Jordan could never have expected she would be arresting Trina Robinson for littering let alone a revenge porn felony. Nor did she ever imagine being on the opposite side of Portia and Curtis in any case.

When it comes to mother-daughter relationships on GH, the one between Portia and Trina is among the most iconic in the show’s history. The last portrayal of a Black mother and daughter on the show since Gia Campbell and her mother Florence- more than twenty years ago. The actresses in the roles at the time, Marisa Ramirez and Lynn Moody did a fine job fleshing out the relationship in the short time the two worked together. However, the storyline never veered from the standard soap opera trope with well-intentioned but disapproving Florence meddling in Gia’s life as her daughter defied her at every turn choosing to make her own way on her own terms.

The dynamic between Trina and Portia has always avoided the standard tropes of a fraught relationship between mother and daughter. Since her debut on the show just a year after Sydney, Brook Kerr has offered viewers one of the best mothers in the show’s history. Dr. Portia Robinson is kind, encouraging, and nurturing to Trina- but can never be accused of coddling her daughter. Portia and Trina have a warm relationship and a close connection. We saw that Portia was wary of negative influences but also respectful of boundaries by stopping short of interfering – unless it was appropriate to do so. Sydney played Trina as trustful of her mother, respectful but never fearful in a negative sense, and always acting in a way consistent with the values imbued upon her.

Tabyana and Brook knocked it out of the park as the two actresses clicked immediately in their mother-daughter dynamic. Tabyana’s performance was layered: Trina is terrified, looking to her mother for comfort, knowing her mother and father will do whatever they can, and desperately trying to keep it together as she faces the unthinkable. Brook played on the polar opposite feeling from a parental point of view: seeking to comfort her daughter, wanting to do anything and everything to help her but feeling just as helpless.

Tabyana was able to do in just one episode what few recasts are capable of in their entire runs on a soap opera. The actress offered a seamless continuation of Syndey Mikayla’s characterization of Trina, one that was consistent without merely mimicking her predecessor. Using the specific circumstances of the storyline to her advantage, Tabyana was able to leave her unique impression on the viewer as she begins to make the role her own. Sydney was able to forge on-screen connections with co-stars over the years and Tabyana has demonstrated she can preserve that going forward- and is even poised to build on it going forward.

Looking forward to what Tabyana Ali has to show us as Trina Robinson, excited to follow her journey as we did with Sydney Mikayla and to discuss it with all of you.

Let Tabyana Ali know what you think of her performance!