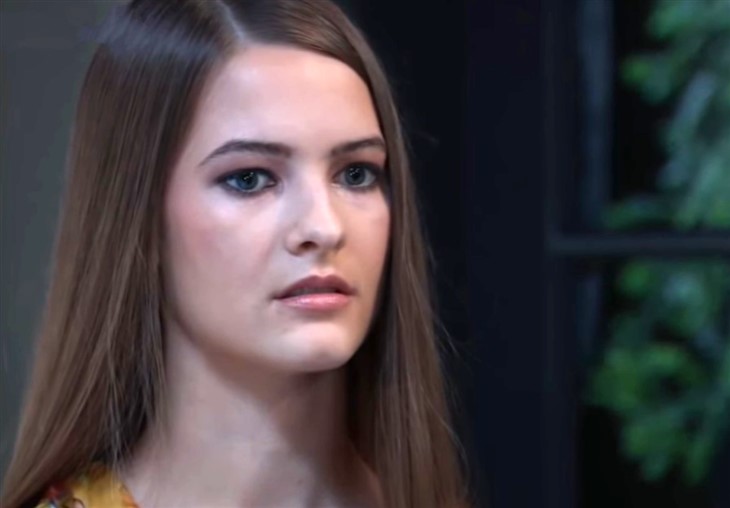 ‘General Hospital’: Esme’s Father is Ryan Chamberlain, Here are 7 Theories On Who Her Mother Might Turn Out To Be…

This week, viewers found out the truth about Esme’s connection to Ryan Chamberlain- he’s her dad! Father and daughter are working on a plan to break up Ava and Nikolas at any cost. But I’m wondering… who’s her mom?

Last summer, Avery Kristen Pohl joined the cast of General Hospital as Esme Prince, the manipulative and psychotic girlfriend of Spencer Cassidine. The talented actress is doing a great job of being a character people love to hate. First, she helped Spencer execute a plan to break Ava and Nikolas up by stalking her- even using Ryan Chamberlain’s voice in her daughter’s teddy bear to scare her. Esme escalated things by torching his stepmother’s car. Unfortunately for Spencer, Esme’s stunt earned him a 30-day sentence in Spring Ridge.

In the meantime, Esme has made it her goal to gain a foothold in Spencer’s life- despite clashing with his friends at every turn. As months passed, Spencer grew ambivalent towards Esme while falling hard for Trina Robinson. After Spencer was sentenced for his crime, Esme became obsessed with going on a getaway to make him feel better and convinced Joss to get permission to use Sonny’s cabin.

Esme hatched a plot against Trina during the cabin trip

Leading up to the trip, it became clear that Esme had other plans. She stole Dr. Kevin Collins’ prescription pad and used it to score a prescription for Tramadol. When the trip finally arrived, Trina and Spencer’s chemistry was off the charts. Esme made hot toddies for a game of “Never Have I Ever” and drugged Trina’s drink. During the drinking game, Trina was noticeably inebriated, Esme took advantage by asking her questions in hopes of embarrassing her and Trina left the room in tears.

Joss and Cameron accused Esme of causing trouble. In the end, Trina was unharmed, Spencer and Esme left the cabin, and Joss and Cameron decided to have sex for the first time. The young couple had no idea Esme was recording them during their private moment.

Eventually, it became clear that Esme planned to frame Trina for the video once it leaked. Esme flat out accused her, which has so far failed. It appears Esme may bank on implying to Cameron and Joss that Trina could have been responsible for doing it while “drunk.” Trina, Cameron, and Joss are on a united front now, but their friendship could buckle under the pressure. Meanwhile, Spencer’s feelings for Trina have only grown, and his lack of interest in Esme is equally undeniable.

Esme may be irredeemable to many viewers at this point

There’s room to argue that the writers have put Esme in a position that makes redeeming her nigh impossible. But then again, I am a #Sprina kind of guy and what Esme did to Trina is pretty much impossible to come back from. Regardless, viewers may have to get used to Esme Prince. According to Soap Opera Network, Pohl landed a contract with the ABC soap opera, which means she will be sticking around a while.

The good news is that Avery Kristen Pohl is making the most out of a character that has not been written exceptionally well. Esme’s nastiness is being played to the best effect possible by Avery, and she deserves credit for her performance despite the script’s shortcomings.

What is Ryan manipulating Esme with?

What we know so far is very sketchy at best. Esme claims to have dead adoptive parents- is Ryan the reason they are dead? She mentioned a nanny in her life that took care of her and is now gone. Who was she? Is Ryan holding the identity of Esme’s mother a secret to get her to help him? These are all valid questions, but the knowledge that Ryan is Esme’s father begs the question: who is Esme’s mother?

Who is Esme Prince’s Mother?

Esme doesn’t seem to be too driven by Ava’s suffering, even though menacing her was Ryan’s plan from the start. Ryan has promised Esme something valuable from her father in exchange for her help breaking Ava and Nikolas up. However, her lack of focus on that goal tells me she may be go no idea exactly why she’s doing it all. While Esme did call Ava’s daughter Kiki by her real name (the fact that our girl Trina noticed and called out) says she is aware of the details of Ava’s life, she doesn’t appear too concerned with the woman at all. Perhaps the reason Ryan has not told her more is that he does not want to reveal the truth. Ryan isn’t her father and is just using her- Esme is actually the child of Ava and Silas Clay or Ava and Franco Baldwin. Ryan’s deception would place her at odds with him. Ava has done terrible things and already lost a daughter- could she be the key to redeeming Esme in the end?

Olivia Jerome was believed to be dead for decades while secretly running the Jerome Crime family from a distance. Olivia was also completely batshit insane, just like Ryan Chamberlain. Is it possible the two crossed paths when she was running the criminal organization, and he was a WSB operative? They might have even been institutionalized together. Olivia is alive and in an asylum currently, which is to say she won’t pop up in Spring Ridge. This would also create a familial link between Esme and Ava- and the added connection would add a layer to Ryan’s obsession we never saw coming.

Okay, this is a long shot. What if Ryan is not the father but is the child of Nina and Silas? Nina gives birth just before her coma- and outcomes three beautiful baby girls. We know Nina’s mother, Madeline Reeves, got rid of one child- who is to say there wasn’t more than one? Three is also… possible? Sort of.

Man, could this couple be more perfect? Ryan turned into a serial killer obsessed with blondes because of abuse at the hands of his mother (who happened to be blonde); Heather is a terrible mother, driven mad by an overdose of LSD (who happens to be blonde). Ryan has switched places with his brother for extended periods; Heather switched babies and kept the truth hidden for extended periods. Who’s to say that Ryan’s obsession with blondes, coupled with Heather’s penchant for baby-switching shenanigans, didn’t lead to romance? And a secret pregnancy? And an adoption? It may sound far-fetched, but we did see letters from Heather Webber, Nelle Benson, and Spencer arrive at Pentonville simultaneously. Anybody who argues that Heather is too old to be Esme’s mother has forgotten that Helena Cassidine gave birth to a miracle baby (Irina Cassidine) at like 65.

Cassandra Pierce was a drug trafficker who had been on the radar of the WSB for years. Maybe when Ryan was an operative for the WSB- something that took place off-screen- he became involved with Cassandra. Cassandra has a past with Valentin and Nikolas- and Nikolas killed her in a boat explosion. Ryan’s gift to Esme could be the revelation about her mother and the proximity to get revenge on Nikolas via Spencer.

Perhaps, Cassandra is alive and working with Ryan. Maybe Esme is aware of this- and has been part of the plan all along. Ryan and Cassandra are precisely the types to ignore a child and then come together to manipulate them because of their self-interest. Plus, if Cassandra seeks revenge, it could send her after Victor Cassidine. If Esme saves the day by taking out Victor Cassidine, it might offer the character some form of a redemption arc.

Faith Rosco was an over-the-top, gun-toting, grandmother poisoning, miscarriage causing, child kidnapping, she-beast from hell. Even Justus Ward tried to smother her with a pillow. Ryan would have loved her- so maybe he did? Faith took a sniper bullet, thanks to AJ Quartermaine. But since AJ faked his death around that time, which is to say Faith didn’t do it as well? Whether Faith’s dead or alive, she’d be a terrible mother. Who better than Faith and Ryan to produce a little sociopath like Esme. Perhaps Faith is part of a scheme that would involve Ava Jerome’s old mob connections?

Felicia spent time off-screen, including during her earliest meetings with Ryan Chamberlain. Felicia even suffers a period of amnesia where she has no memory of meeting Ryan and being aware that he murdered his wife despite witnessing the event. Felicia could have participated in a WSB program during her time away with Frisco in the mid-2000s. A memory mapping/ memory tampering program involving the WSB would tie into Ryan’s previous WSB connections. This memory mapping afflicted Drew and could perhaps explain why Frisco has been such an absentee father in general. A WSB cover-up of Felicia’s unknown child is an intriguing possibility that connects Esme to various legacy characters and utilizes a veteran of the show in a compelling manner. It also seems a lot less likely than most of the other options. But to be honest, I was blown away when the writers had the good sense to bring Kristina Wagner back on contract.