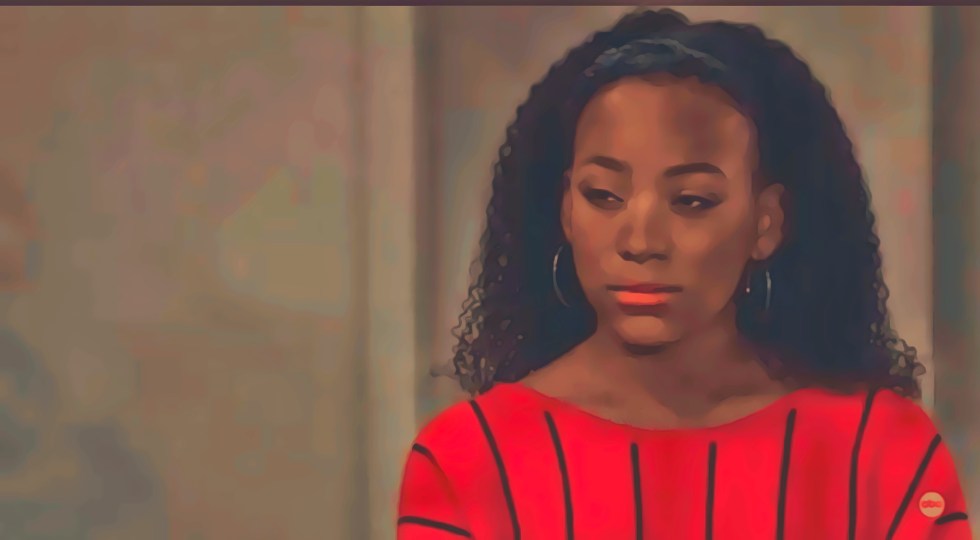 UPDATE: There it is, folks. Soap Opera Digest confirms what we all hoped was a mistake. Sydney Mikayla has made the decision to exit ‘GH’ . The actress, who was dropped to recurring this past fall, a move that coincided with her first semester at UCLA. The decision to focus on school exclusively was Sydney’s alone. Her final airdate is March 17. You can read the official statement here.

The news just broke that General Hospital’s Sydney Mikayla, the beloved Daytime Emmy Nominee will be exiting the role of Trina Robinson. This comes as a shock to fans of the ABC soap opera, as her onscreen romance with Spencer Cassidine (Nicholas Chavez) has been the story to watch.

The role has been recast with actress Tabyana Ali. As a fan of both the character and the actress, I wish both young women all the success in their current paths. Thank you, Sydney for your performances the last three years. We look forward to Tabyana’s take on the character. Thankfully, Sydney’s legacy of jump- starting the diversity on the 59 year old soap opera lives on.

But the writing was on the wall for some time. Sydney Mikayla was approaching the end of her third year with the show and had just started her first year at UCLA. The actress was placed on recurring and it became noticeable that the actress was focused on school. Mikayla and GH made the best of what scheduling they could make work. Mikayla managed a 4.0 GPA her first semester.

I wish the actress the best of luck- she deserves the moon and stars- and frankly GH was unlikely to be able to keep the lighting in a bottle talent to themselves for too long. The ABC soap has committed to ensuring that Black characters remain on canvas and the role will be recast- which is a positive thing for the storyline.

The actress was always a delight onscreen and off as well. Recently, she took to Twitter and joined a Spaces chat with her fans to thank them for their support and birthday wishes. She truly is a bright star. Here’s some history on her time as Trina Robinson.

Trina Robinson was initially played by Tiana Li beginning in 2017. Trina appeared sporadically, with the character appearing in just five episodes before the role was recast. The part would take on new importance when Sydney Mikayla took on the role of Trina in March of 2019. After just four months with the show in a recurring capacity, Sydney Mikayla became a contract player in July 2019.

Trina was a pivotal character during Oscar Nero’s cancer storyline. Initially, Cameron sought Trina’s assistance in finding a marijuana source to ease Oscar’s suffering, resulting in Cameron being arrested. For the most part, however, the early characterization of Trina having a troubled/bad-girl reputation was chalked up to being overblown, a shift that coincided with Sydney Mikayla’s casting.

The four teens set off on a road trip to Niagara Falls to cross off an item on Oscar’s bucket list. The trip turned sour as they ended up on a collision course with the serial killer, Ryan Chamberlin, impersonating Kevin Collins. After the road trip, Trina is determined to keep everything as normal as possible for Oscar and Joss during his last weeks alive.

Despite her grief over Oscar’s passing, Trina does her best to support Joss and Cam, even agreeing to take part in Joss’ attempt at a seance to contact their late friend. Trina does what she can to help Joss through her grief and accompanies Cameron to his mother’s wedding to Franco since Joss is not yet in the right mindset for celebrating. Both Trina and Cam are pleasantly surprised when Joss decides to attend at the last minute.

As 2019 progressed, viewers saw Trina be featured more frequently, especially in helping Joss handle the grief following Oscar’s death. Trina is just as supportive of Cameron when he deals with the traumatic events of his kidnapping and almost losing his step-father Franco. This year also saw the introduction of Dev Corbin, an illegal immigrant taken in by the Corinthos family under the guise of being a distant cousin. Trina began to have feelings for Dev and sought Cameron’s advice on getting him to like her.

At the beginning of her senior year, Trina applies for an internship at the Jerome gallery. The gallery’s owner, Ava Jerome, is initially hesitant to hire Trina due to her lack of experience, but she ultimately makes an impression and gets the position. Trina steps up at the gallery when Nikolas Cassidine is stalking Ava. Trina worries about her boss when Ava checks herself into a mental hospital due to her delusions that her late daughter is haunting her. When Ava is out of the hospital, she is impressed by Trina’s commitment to the gallery. Ava and Trina begin to bond during this time, despite most people in town disliking the gallery owner, including her best friend, Joss.

At the school dance, Trina kisses Dev, but he informs he that he wants to be friends. Trina believes Dev likes Joss, which he denies. Later, when Trina realizes Joss and Cam had been drinking, she attempts to sneak them out only to be caught by their teacher Dustin who gives them Saturday detention. While in detention, Dev reveals his immigration status; the friends swear to keep the truth a secret. On Christmas Eve, Trina tells her best friend that Dev has a crush on her.

The writers introduced Trina’s family and, much to the viewer’s delight, made her a legacy character. The return of Marcus Taggert as her father coincided with a new threat to Port Charles of Cyrus Renault, which was central to the storylines of GH for the next 18 months.

Trina plans to attend the winter formal with Cam as friends. However, Trina tells Joss it’s an actual date to encourage Joss to confront her feelings for Cameron. Taggert gives his blessing for Cam to take Trina to the dance and share a sweet father/daughter moment. Unfortunately, the two end up abducted on their way to the prom by Cyrus Renault’s men.

Taggert, Curtis, and Jason Morgan rescue them (Steve Burton), and Taggert is wounded in the process and dies shortly after surgery. Dr. Portia Robinson returns from her medical conference to comfort her daughter. Trina blames Curtis for Taggert’s death in the aftermath, believing he could have done more to save her father. Grief-stricken, Trina turns to Cam for comfort, and they share a kiss. Trina later confides in Joss about her kiss with Cam. Trina tells Joss the kiss meant nothing, much to Cam’s chagrin.

To distract herself from her anxiety around her grief, homecoming, her feelings about Cam, Trina throws herself into her internship. When Cam admits that he has feelings for both Trina and Joss, they kiss again and decide they are better as friends. After Joss rejects his romantic advances, Dev suddenly lashes out at Joss and Trina. Though Dev apologizes, Cam has to convince Trina not to end their friendship with Dev for good. Cam and Dev are at the explosion at the Floating Rib, and the incident claims Dev’s life. The three teens support each other in their grief.

When Cyrus claims Taggert faked his death to protect Trina, she seeks out proof. Trina tries to access Taggert’s medical records with Joss & Cam’s help; Nurse Epiphany Johnson (Sonya Eddy) stops them from accessing the records. Trina tells Portia about Cyrus’s claims, and her mother suggests they file a formal harassment complaint. Upon arriving at the police station, the mother and daughter are shocked to find Taggert is alive and well. While Trina is happy her father is alive, she’s furious that he allowed her to grieve his death instead of trusting her with the truth. Despite Ava’s advice that Taggert made the best decision to keep her from bearing the burden of lying to the police, Trina wants nothing to do with her father in the New Year.

Cam suspects Franco faked his death to spare their family the pain of watching him die from a brain tumor- similar to what Trina’s father had done. The girls help Cam break into the hospital morgue to identify Franco’s remains, and Trina feels terrible for giving Cam false hope. Trina finally apologizes for how she treated Curtis, and he encourages her to reconcile with Taggert. At his arraignment, Trina encourages Taggert to fight for his freedom so they might mend their relationship.

Trina is excited when she and Joss are accepted to Port Charles University, while Joss is sad to be waitlisted by her first choice. Despite Trina & Joss’s words of encouragement, Cameron ultimately decides not to attend Stanford University to stay close to his family. Trina and Joss drive to Nixon Falls to pick up Jax who has been shot. The two teens narrowly miss seeing Sonny alive and well.

Trina is relieved when her father is released into Jordan’s custody and sentenced to house arrest as he awaits his trial. Trina apologizes to Jordan for her harsh treatment of the commissioner over the previous months. When Jordan reveals that she is getting a divorce, Trina empathizes with the woman. The conversation leaves Trina weary of Curtis and Portia’s growing closeness.

Upon learning that Cam pulled a gun on Jason and later Jordan, Trina is furious with her friend. Trina explains that if Cameron looked like her, his life could have ended in tragedy. What follows is a heartfelt conversation on the systemic racism that people of color face each day and the white privilege of living a life where the same consequences do not apply.
Cyrus later ends at the Robinson residence, where he takes Portia and Trina hostage. Trina and her mother try to reason with Cyrus as Kevin, Laura, Curtis, Taggert, and Jordan await outside the home. Laura trades herself for Trina and Portia, with Curtis saving the day by storming the house. Cyrus is later taken into custody and sent to prison in the midwest.

Trina unwittingly had an encounter with the mysterious intruder from the Jerome Gallery. Trina ends up in a trap meant for Ava. Trina walks into her party at the Savoy covered in fake blood. Later on, a young man claiming to work at the Savoy introduced himself as “Victor”. “Victor” was later revealed to be Spencer Cassadine. Trina was the first to learn that Josslyn and Cameron were dating but enjoyed the flirtation she had begun with “Victor.” Trina eventually confided in Ava and Portia about the boy she had met. While Trina was shocked to learn that Victor was really Spencer, she agreed to keep him in town a secret as long as he never lied to her again.