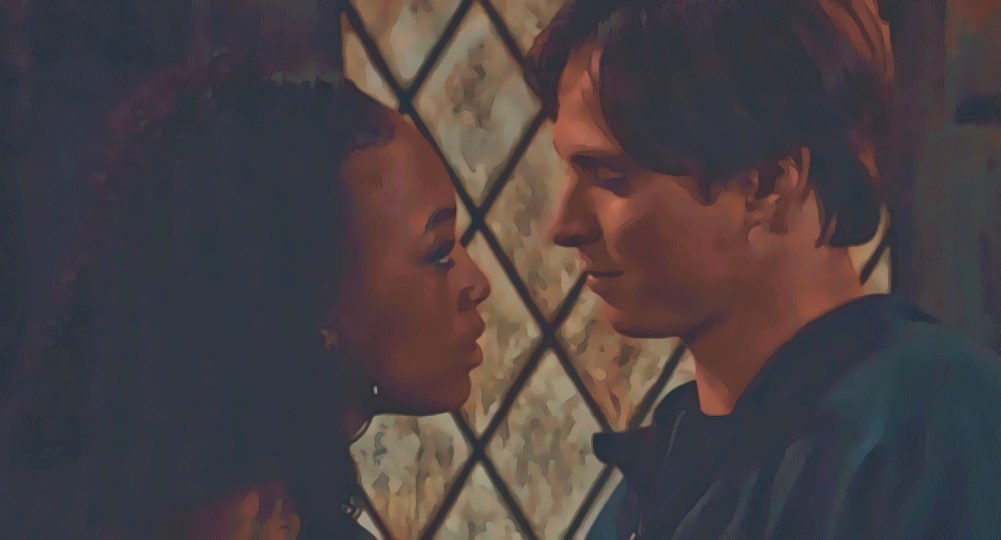 Love In The Afternoon

Second only to the core of family dynamics, the driving force of soap operas has been romantic relationships- hence the term “Love in The Afternoon” was coined by ABC. The soap opera genre went from homemaker-programming to cultural phenomenom on the back of love stories- especially young love from the perspective of young people. Soaps like ’General Hospital’ were the first slowly build love stories between younger characters- from first steps in the journey, overcoming adversity and eventually resulting in a payoff for the audience.

‘General Hospital’ isn’t nearly as romantic as it used to be- nor are any of the soaps. Much of the storytelling depends on twists, regardless if they make sense, as long as it shocks viewers. So when ‘General Hospital’ seems like they are setting up a story intentionally, that’s a big deal. And when the story seems like it could recapture that “Love In The Afteroon” magic for the first time in history, the audience is going to take notice. With Spencer and Trina, ABC has something very big on its hands and its impact is going to be felt.

Sydney Mikayla and Nicholas Chazez Deserve Much of The Credit

For their parts, the talented young actors, Sydney Mikayla and Nicholas Chavez, have made the couple easy to root far from their first scene together. Mikayla began her run on the show primarily trapped in the same trap that many Black characters on a soap do: supporting best friend of white lead. The instantly likeable Mikayla, however, impressed in her role and Trina was quickly made the center of a second Black family in Port Charles.

Trina was made a legacy character with the reveal that Marcus Taggert (Real Andrews) was her father, introducing her mother Dr. Portia Robinson (Brook Kerr)- from then on Mikayla’s visibility onscreen increased and she managed to shine each time. Whether it was dealing with her father’s ‘death’, finding out he was alive, going toe-to-toe with Cyrus Renault, simple heart to heart moments with her mother- the actress was able to show a range of versatility prior to the return of Spencer.

When Cameron was paired with Josslyn over the logical and implied relationship budding with Trina, viewers feared that she was being passed over. Thankfully, Trina has been front and center with a clear trafectory towards a relationship with Spencer being carefully laid by the writers. Both Mikayla and Chavez have handled the growing romance with subtelty and skill beyond their years.

Chavez deserves credit for stepping into the recast role of Spencer, which had been plated for years by Nicolas Betchel. The handsome actor was tasked with taking the characterization of Spencer as a pre-teen and adapting that into a leading man. Betchel was a natural at playing a kind of haughty, spoiled, entitled and manipulative little boy who was almost too adult for his character but still very much a kid. Chavez maintained a little bit of the arrogance and lack of awareness of how the world works due to his prievelige. On the flip side, Betchel was always able to sell this defiant and proud side to his character. These elements are where Chavez has made his strong suit- clashing with Ava and Nikolas over their wrongs.

Mikayla and Chavez are bring their A-game in scenes together, working ever moment between them to full effect. Recently, Trina and Spencer shared a scene involving a touch on the arm and the words ”I see you”. It set the internet aflame as a GIF before the episode even ended, an instant classic and iconic moment. The two are consistently engaging with their fans via social media- often staring down the negative Twittersphere with positivity, gratitude and a sense of humor. The fan interaction has helped seed viewer excitement- aided by Mikayla and Chavez making promotional efforts like interviews of their own accord. The signs all point to a storyline that has everybody standing behind it 100 percent. The story that has a lot of moving parts, potential for more drama and has been executed in a coherent and deliberate way.

Writers appear to have planned this out… surprisingly

Here’s a rundown of what had happened.It is not meant to cover all that happened but can act as an outline during deep-dives later this week:

This isn’t the complete story- but don’t worry I plan on deep-diving into #Sprina’s story in an upcoming post this weekend. The detailed plotting and various elements deliberately written into the story is proof the writers have a vision of something coming to fruition at some point. The fact that all of these plans seem to have been in place well before fans expressed their interest in the couple’s romance is encouraging as well. The viewers who are excited are responding to what appears to be intentional storytelling- but many viewers remain skeptical that there will be no follow through. No one can blame them for being concerned.

Starting this weekend , I will be writing posts about the #Sprina storyline and fan movement- at least one every Saturday or Sunday. One half of the posts will likely discuss the storylines, recent episodes, spoilers, the actors, speculation, etc. The other half will be sharing the concerns about the handling of diversity, the history of GH’s relationship with Black viewers and treatment of Black characters and cast and outlining opportunities that the show and network have to do better.

‘GH’ Has A Spotty Record in Diversity

While ’General Hospital’ has gone through a transformation in hiring and writing stories for Black performers, there is room for improvement. Still, the soap has a bigger cast of color than ever before. Unfortunately, GH still has glaring issues in its handling of characters of color and the actors who play them.

The potential for this couple to have a positive impact on ’GH’ as a whole can’t be overstated. While I am not a member of the BIPOC community, I am an ally who grew up in a diverse community and representation is an important issue for me. As a self-taught soap opera historian, the diverse representation of characters in daytime is something I continue to study and research. However, the impact of the experience is on those in the community directlty- I want to make sure I speak to the issues but not for the members of the community. Any opinions, any observations, concerns, comments that the community has- I hope you share them.