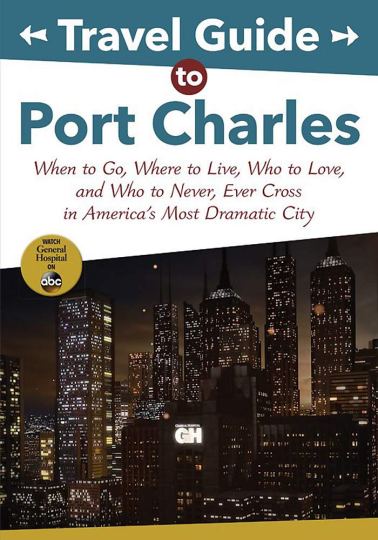 After Days: Beyond Salem, the five-part limited-series unique event spin-off from Days of Our Lives premiered in the fall, all I could think about was potential spin-offs for ABC’s General Hospital. Around that time, I brainstormed some ideas with the hopes that somebody at at Disney might get inspired to make it a reality. A few months later during Winter Press Tour, the head of programming at ABC/Hulu responded to
questions about the possibility an offshoot of GH coming to fruition. The executive responded that the network was very open to the idea but had no set plans.

Soap operas are unique in their endless story potential, and the one thing all viewers have in common is speculating what will happen next. What’s even better than story speculation that is encouraged by the powers that be? Outside of the network actually acting on producing a new series, not much else.

Now, another blog seems to be on our wavelength and have jumped into the spin-off speculation.

Here were my ideas for General Hospital Spin-off:

Based on book ‘The Travelers Guide To Port Charles: When To Go, Where To Live, Who to Love, Who To Never Ever Cross, In America’s Most Dramatic City’ By Lucy Coe.

Presented by Deception Cosmetics, join your host Lucy Coe (Lynn Herring) as she takes viewers on a tour of iconic Port Charles sites every week. Grab a coffee and some chili with Ms. Coe at Kelly’s Diner. Avoid getting on Carly’s bad side with Lucy while dining at the Metrocourt- fingers crossed you won’t get shoved in the rooftop pool. Enjoy the cool atmosphere of Curtis’ recently opened club , The Savoy.

Join Lucy and her “good friend” Monica Quartermaine on a tour of the Quartermaine Mansion. An estate that our host will remind viewers that Monica only owns because Lucy’s ex-husband, Alan gave it to her.

Take a gamble with Lucy as she tries her luck on the majestic Haunted Star, the casino cruise ship owned by many lucky (and unlucky) residents over the years. If you are brave tou can even venture out to Spoon Island to the beautiful castle at Wyndemere- just show a little caution around the parapets.

Who wouldn’t want to watch a half-hour mockumentary-style series highlighting Port Charles? It’s a fresh, funny and budget-conscious way to expand GH as a franchise.

As a bonus for ABC soap fans, Lucy Coe can host special episodes that can take a look at some of the other iconic locales like Pine Valley, Llanview, Beecher’s Corners, Corinth and Nixon Falls.

The World Security Bureau, better known as the WSB, is an international spy organization that operates independently of world governments. The former head of the agency, Sean Donely, spent the last of his years grappling with a mystery before he passed away. Now his daughter, Annie Donely, has stumbled upon evidence that might prove his suspicions correct. Complicating matters, the WSB has been taken over again by Victor Cassidine. Annie has been tasked with apprehending the former head of the agency, Frisco Jones.

Unbeknownst to Victor is that Annie is working with Frisco to find the answers her father had been seeking. The rogue agents rely on each other and their WSB training as they navigate the investigation of WSB operatives past and present. Aiding in their efforts is an unlikely ally: Dr. Andre Maddox. But can they trust the man behind the technology that has sent the safety of the world into jeopardy?

Annie has the help of one of the sharpest journalists with experience in WSB matters. Her mother, Tiffany, who kept extensive voice recordings of her experiences over the past four decades. Viewers will relive the past with footage from classic episodes of GH, additional footage of reenactments narrated by Tiffany (voiced by Sharon Wyatt reprising her role), and all the action-packed fun of the 80s with a 21st century feel.

Mac Scorpio is back in the police commissioner’s office after Jordan is sidelined by illness. Taggert has rejoined the force but is under strict orders to stay in line. His partner, Valerie has become one of the foremost crime scene investigators in the country. Val’s habit of putting scientific analysis above the gut feelings that rule Taggert cause them to clash. And will Marcus Taggert be able to focus on his cases when he meets the PCPD’s Criminal Psychologist, Dr. Lainey Winters? Actually, he’ll probably be more worried about the new District Attorney now that Robert Scorpio has gone on a search for Holly Sutton.

Robert’s assistant, Mollie Davis’ was excited to learn that a woman had been chosen as DA. Not just any woman, but her mother’s former protege and Taggert’s sister, Gia Campbell. A skilled prosecutor, Gia isn’t above using a cutthroat tactics o win cases. Is she winning it in the name of justice? Or is it aimed at furthering her political ambitions? Gia is as confident as ever and thinks that she can get a conviction out of every trial. But can she go toe to toe with the likes of Dianne Miller and Martin Gray? And as her political ambitions grow, will she end up clashing with current mayor of Port Charles, Laura Collins?

Deep beneath General Hospital lies a horrifying secret that bends time and space. A place where anything , no matter how deranged, demonic, dark, or evil is possible. Lay tour eyes upon, Port Charles: Books Of Caleb, the anthology series that takes place in Port Charles so similar but so different from the one we know. If the dark forces at work in this alternate reality have it their way, every universe will feel the darkness of Caleb.

The Book of Caleb follows Port Charles in one of many iterations throughout many possible realities—featuring the casts of ABC Daytime including GH, One Life To Live, All My Children and Loving. The soap will look and feel like a traditional daytime soap opera with new half-hour episodes each day. Each season, or ‘Book,’ in the Books of Caleb, tells a self-contained story with a beginning, middle, and end throughout 65 episodes. After 13 weeks, the story resets- with a new universe and timeline fighting against Caleb in a never-ending but constantly changing fight against evil.

The Port Charles Invader is the hottest newspaper in the city, but can it become the biggest thing on the internet? Michael Corinthos has Jackie Templeton on board as long as she keeps full editorial control and ”Th best tech wizard available”. Getting that tech wizard, family friend Spinelli, should have been easy until Spinelli mentions Jackie’s articles about his past as the criminal hacker, the Jackal. Now, Michael needs to hire a go-between that can handle both Spinelli’s neurotic nature and Jackie’s no-nonsense approach to getting the story. He chooses his younger sister Kristina Davis-Corinthos. Kristina is an aspiring blogger, more accustomed to making headlines than writing them, but what she lacks in experience she makes up for with passion. Michael is prepared for his venture to have some hiccups. But what he didn’t anticipate was the greatest investigative reporting of the century. That kind of success comes with a price, and it may be the entire city of Port Charles that pays for it.

Not many people stop to think about how much we all depend on nurses. And at General Hospital, if this group of nurses paused for even a minute, everything would come to a screeching halt. In an occupation where a one bad day at work can mean life or death, you learn to leave your drama at the door and focus on others. In Port Charles, where drama, intrigue, passion and danger lurk around every corner, leaving your drama at the door, is not easy.

Follow Chief of Staff Dr. Terry Randolph, Emergency Room Dr. Lucas Jones, Head Nurses Epiphanny Johnson and Bobbie Jones, and many more familiar faces as they navigate medical mysteries, traumatic injuries and the stress of their own lives in each episode.