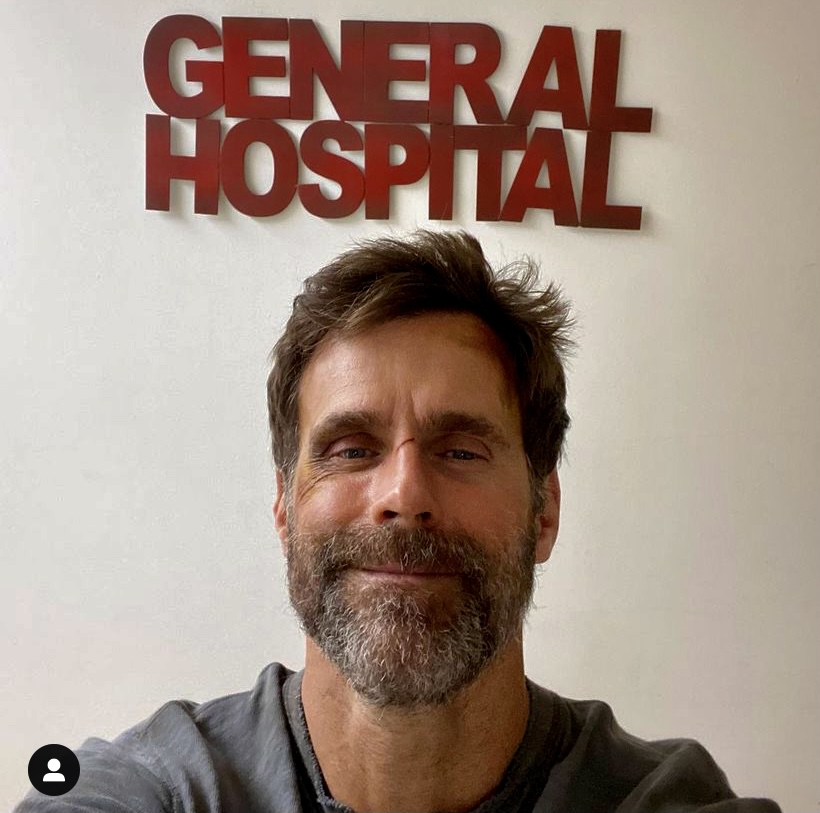 Five months after the announcement that Cameron Mathison was joing the cast of General Hospital, it appears the actor has offically begun filming. While, It’s really anyone’s guess who the actor will be playing on the ABC soap opera, I am just going to echo the rumors that Cameron Mathison will be playing the role of Drew Cain, previously played by Emmy Winner Billy Miller. Again that is just based on internet rumors. As we all know when it comes to soaps for every true rumor there are a dozen or so completely wild guesses being trafficked as fact. However, what is a fact is that The actor posted this shot of himself on Instagram.

IS THE PHOTO A CLUE? BUT COULD DOES IT MEAN?

While Mathison did not post any shots of him on any actual sets to keep us from any clues as to who he will play. I do think his beard is a clue. Outside of being impressed at how good the actor looks with facial hair, I had this instant reaction: How else would Drew Cain look had he survived a plane crash in the wilderness for two years? Or maybe we will see him being imprisoned at some unknown location by Peter’s minions? Similar to how Emma Samms made her cameo as Holly Sutton last year when Peter faked her death? A long time without the luxury of shaving in captivity would definitely have him sporting a beard. But again this is total speculation. Since having a beard is totally a good look on Mathison, I could be way off base.

Could the beard be that of an imprisoned or lost in the wilderness, Drew Cain?

There was something else that struck me about the post. It wasn’t about the post or his account, but about Instagram in general. I personally haven’t been as active on this application as of late. My soap social media involvement has been all Twitter all the time. Which as a soap fan/blogger, the experience has been a bit demoralizing. With my social media perspective skewed a bit, I was more than pleasantly surprised to see so much positivity and goodwill below the actor’s post.

Good Vibes From His Peers

Seriously, there were positive comments by the hundreds. The good vibes were refreshing. Not to say that Twitter is all bad, but positive responses- or really anything neutral gets drowned out by the constant negativity. Since the discourse there was easier to scroll through I was able to notice something I think I miss in all the nastiness on Twitter: respect and camaraderie from other soap stars.

Former ‘All My Children’ Co-Stars Congratulated The Actor

Among the many positive voices were at least dozen of his former co-stars over the years. Cameron Mathison spent over a decade playing Ryan Lavery on All My Children and was nominated for an Emmy for his performance. Former AMC cast members sending out the good vibes included his love interests Rebecca Budig (Greenlee) and Alicia Minshew (Kendall). Others former co-stars Jacob Young (ex-Lucky, GH and Ex-J.R., AMC) and Eva LaRue (Ex-Maria, AMC) also shared well wishes.

Mathison’s hiring on GH came just after his talk show Home & Family was cancelled. The show was a revival that began in 2012 and Mathison had been hosting alongside Debbie Matenopoulos since 2018. Matenopoulos might be familiar to you as co-host of the View during the first season. The final episode of Home and Family airs August 4th. Debbie shared her well wishes for her co-star. As did Allison Sweeney (Sami Days of Our Lives), a co-star of Cameron Mathison’s on several Hallmark Channel movies, wished him well on his endeavors. And even Bold and The Beautiful’s Don Diamond got in on the love fest.

Warm Welcome by None Other than: Finola Hughes!

Another notable commenter to his photo: Finola Hughes. Hughes is currently playing Anna on GH, a role she originated in 1985 before exiting in 1992. In 1999, Hughes became Mathison’s co-star when she joined the cast of All My Children. This was in the role of Anna’s twin sister Alex. Two years later she would revive Anna Devane and officially initiate the crossover of characters between the two soap operas. Her character’s entrance led to the death of Mathison’s love interest on the show. alongside the actor. The Emmy-winning actress welcomed him to the cast.

Not only were there positive comments galore, Mathison takes the time to respond to as many responses as humanly possible. Not just from his peers, but from the fans. That has changed my view on the casting news, regardless who he plays. There has been mixed reaction to the actor joining the cast, but I am no longer in the dubious side of things. Having not only the respect of his peers but having the respect for his fans makes him a welcome addition to GH. Expect to see the actor onscreen this August.