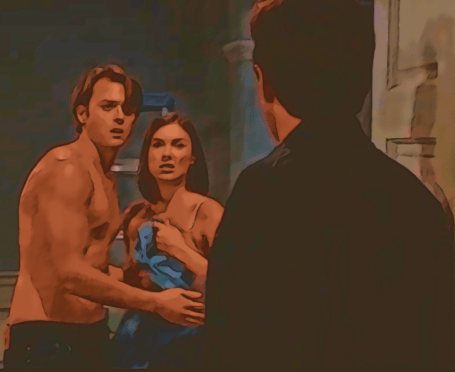 #GH’s Michael and Willow Make Me Want My Pillow

Michael, a Spencer-Quartermaine love-child, was raised in Corinthos crime family. For better or worse, Michael Quartermaine Corinthos is the symbol of modern-day GH. Why the 🤬 isn’t he more interesting? Actor Chad Duell hasn’t aged a day since stepping into the role ten years ago, and it appears Michael hasn’t aged mentally at all in that timespan. He’s an adorable moron who pretends to be an adult with a pretend CEO job a and pretty much waits around to look concerned about something. But the moron will do anything for his son and wife. I can’t fault him for being a good father and husband. I mean, Jason Morgan could take some notes. But man, is he dull.

Willow isn’t much more compelling. Writers seem to believe Willow’s perpetual state of worry helps matters. Unfortunately, it rings hollow, given that she has it made being married to a man who will do anything for her. Michael knew Willow wanted to be in his son Wiley’s life; he married her. Willow asked for an annulment to their marriage to let her go back to Chase; Michael gave it to her with little fuss. He even went ahead and remodeled the gatehouse for her to live in.

When Willow felt Michael was who she wanted, homeboy took her back with open arms. When Chase’s health took a turn, Michael got on board with Willow keeping the truth about her feelings concealed. He even invited Chase to stay at the Q mansion to keep an eye on his health because Chase means a lot to Willow and that means a lot to him. Throughout all of this, the girl has Chase totally in love with her, which brings us to the couple’s only (and very dull) storyline.

Keeping their feelings from Chase because of his health issue makes sense. Plus there is a little drama since they called him out for lying to them under the same “not wanting to hurt anybody” pretense. The problem is that it’s less interesting to watch as much as it is cringe-inducing. Nobody will walk away from the story any different when the truth comes out, and it makes all our cringing pointless.

Worst of all Chase continues to be without a love interest and that’s a total waste. And it doesn’t address the abrupt shift Willow has made from Chase to Michael. I’m not against this couple. There’s a way to keep Michael and Willow together, have it make sense, and be engaging. And it’s right there before our eyes.

Michael and Willow have sexual chemistry with each other and that’s what has made their marriage work. They love having sex! The love having sex with each other! Is that so shocking? They got married, so what is the problem? Why not just come out and say it? Soap operas have been built on sex for decades but never in a positive light. People have affairs, one-night stands, surprise pregnancies, paternity drama and somehow celebrating sex is still taboo? It would be a refreshing change to have Michael, a wallflower in regular interaction, coming to life in the bedroom. The development allows him to be less of a man-child and more the romantic lead he is supposed to be.

Willow has layers to her character, that haven’t been seen in what feels like forever. Willow needs to confront the damage she carries from her past with the Dawn of Day. Revisiting the sex abuse cult is heavy, but Willow taking this journey of sexual discovery with Michael’s is a progressive and interesting angle on the emotional trauma. And it doesn’t have to be dark and depressing. Willow enjoyed sex with Chase but never fully comfortable with him, and it weighed on her because of her unresolved issues. Michael and Willow basically offer each other a sexual therapy. And it makes a hell of a lot more sense than “we fell in love”.

Finally, Some Love In The Afternoon

Writers could finally counter fan complaints about the lack of happy couples on the canvas. Michael and Willow could go from the snoozefest they are now to the poster-children for love in the afternoon. Picture it: Willow and Michael can’t keep their hands off each other. They constantly get interrupted during it by the million people living at the Q mansion. This would add to the long-standing tradition of the Quartermaines, adding to the comic side of GH. What better way to showcase actors/characters the producer’s love, inject fuel into their storyline, and add fun to a soap opera so often accused of being dark?